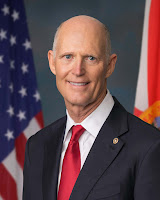 Fox News published Florida Senator Rick Scott's op-ed on November 10, in which he explained that many Americans are losing confidence in our national elections given the numerous allegations of fraud committed in the November  election. Scott then described the VOTER Act that he introduced last September to ensure honest conduct of elections across the country.

"My VOTER Act would ensure the security, reliability and orderly conduct of elections by creating nationwide standards for vote-by-mail systems. Voter ID is an important part of that, and states should not allow same-day voter registration, which is a recipe for fraud."

Thank you, Senator Scott, for your leadership on this crucial issue!

The RCGSA meets monthly to discuss both local and national topics of importance to Republicans. Each meeting includes a featured speaker or activity to better inform our members on important issues. The evening begins with time to socialize and order food, followed by the program. Membership is $35 for a couple, $25 for a single, and $10 for students. Dues may be paid at the meeting by cash or check (made payable to RCGSA) or by check mailed to P.O. Box 4482, St. Augustine, FL 32085.